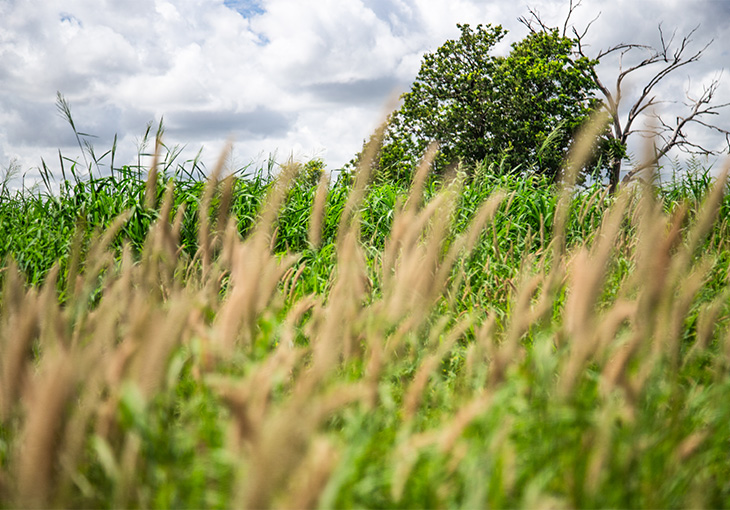 When Alana Carter became manager of the family’s cattle farm after her father fell ill, she quickly learned the importance of having the right support. She depended on cattle management software to negotiate day-to-day operations and says farm management apps like MaiaGrazing can work to bridge generational divides on farm.

It was a baptism by fire and with no formal management training Alana Carter successfully steered the family farm through its most difficult time – with a little help from MaiaGrazing.

Like many young farmers, Alana had always been keen to join the family business and had been working alongside her father, doing admin and book-keeping, when she unexpectedly found herself thrust into a role she’d never coveted, that of farm manager, after he suffered a debilitating stroke in 2019.

With properties in Calliope and Banana in central Queensland, the Carter’s breed and fatten brahman cattle. When the going is good, they have about 800 to 1000 breeders. “We’re not huge, by any means,” says Alana. “But neither are we small.”

“It was a situation no-one saw coming,” Alana says of her father’s stroke, so it was with enormous trepidation that she assumed the day-to-day operations of the farm. “We were in disaster mode.”

“I’d grown up on the farm and seen how Mum and Dad did things, but I didn’t know how to be a farm manager.”

Her immediate concern was to check cattle, fences, and water.

She had a million questions that ranged from basic (How many head of cattle are there?) to more complex (Why did you and granddad do it this way?) and had no one to ask.

As if Alana’s situation was not complicated enough, Central Queensland was also in drought at the time. No-one could remember winter rain; it had been so long since they’d had any.

“I didn’t know how to deal with what happens on farm in drought and how to get though it mentally myself,” says Alana. “I needed outside help.”

What Dad would do

Over time, like most farm kids, Alana had absorbed the working rhythms of the farm but that didn’t mean she necessarily understood why her dad – and her grandad before him – did things the way they did. “I knew what the good and bad times looked like, but I didn’t understand the ‘why’ behind operational and management decisions.”

“That’s when MaiaGrazing came into the picture,” she says.

At the start, Alana was not dealing with an ideal scenario and getting the most basic data into the farm management software was a priority. This meant cattle numbers and paddock configuration to start. Recording rainfall, cattle movement and more would come next.

“At the start we didn’t have feed where the cattle were working and the fencing wasn’t in order,” she remembers. But the first win wasn’t far off. “Having a digital record of our paddocks, the number of cattle in each, the available feed, and the time the cattle would be on it meant that I could plan mustering ahead of time, rather than be forced to muster because there was no feed.”

“It’s what they say, isn’t it, to work smarter, not harder. Making changes on how we do things day to day should make things easier.”

Alana worked closely with the farm’s financial management team, consisting of her father’s Enduring Power of Attorney, accountant, bank manager and stock agent. They made sure Alana had what she needed, engaging a consultant and providing her with formal education and farm management software.

Their support was needed and appreciated. “It was just me,” she says.

Then the rain came

Central Queensland, or at least the Carter’s Calliope and Banana properties, had good winter rain in the years Alana was pulling the farm together in the wake of her dad’s stroke. The properties were much improved and there was plenty of feed. “We were luckier than many and didn’t have to scale down our cattle numbers,” she says.

Recording the rainfall quickly became one of Alana’s everyday habits and by adding the data to the farm management app each day was the start, each day’s data adding to an important bank of information. “I always carry my phone with me and it’s easy to record the daily rainfall when I’m out in the paddock,” she says. “It’s something Dad always did, but not always across the two properties. It’s simple to do and easy to record and you know it’s in a safe place. Having the data means I can compare our rainfall to regional averages and see how we’re tracking.”

One of Alana’s goals was to rest paddocks for 60 to 90 days to recover between cattle movements and it was this feature in MaiaGrazing’s cattle management software, where she could track the paddock rest periods, that she most relied on.

“Although, it’s not a hard and fast rule, as you can reassess when you go into the paddock,” she explains. “In the beginning, when I only relied on what I observed, I found I’d often over or underestimated how much grass we had. If I was to change anything, the MaiaGrazing forecast tool helps me plan cattle moves and shows me the different outcomes.”

You’re not going at it alone

For Alana, the best thing about using MaiaGrazing is the one-on-one support that’s available. “Short of coming on farm to help with the cattle, the Maia support team was always available to answer questions by phone, email or online chat. You can ask for help and someone will always be able to respond, one way or another.”

When Alana placed her calls to MaiaGrazing, she wasn’t put through to a call centre hotline but to an experienced grazier in either Australia or the United States. They stood in their paddock or were seated at their office desk when they took her call. Their principle task is not to assist Alana with business or farming decisions, but to help her understand the features of the farm management software and become a confident user so she would go on to make confident and informed decisions based on her own set of data, circumstances and farm.

Everyone on the MaiaGrazing support team has walked in Alana’s shoes. The individuals on her Maia support team are experienced graziers with working properties who have already implemented and successfully applied MaiaGrazing on their own place, experiencing improvements on their farm and business.

They know what it takes for someone to learn and implement a new system and which features are going to make the biggest impact. Best of all, they remembered what it was to start out. “We worked through the farm management software at my pace,” Alana explains. “The goal was to simplify. It’s all well and good to collect data, but if you’re not going to use it, what’s the point?”

Three-year’s worth of data now provides Alana and her expanding team with a much clearer picture of the business than the one she inherited. “We’ve come a long way,” she says. “We now have a handle on how many cows and breeders we have and our classes of cattle. We know how many first-calf heifers we have and what bull we’ve joined to them, all from using the program.”

“We have the opportunity to really grow the business now.”

One of Alana’s proudest management success stories is the through-the-roof improvement in calving percentages – it’s now 90 per cent. The improvement came on the back of a single operational decision to swap from all-year to seasonal mating. Introducing a testing regime – semen testing the bulls and pregnancy testing the cows – is another small change that has had a significant impact on the profitability of the business.

“Having a seasonal plan has also meant we’ve been able to forecast mustering of bulls in and out and when calves are due,” Alana explains. “You can’t do that if you’re mustering 10 times a year because you’ve got calves dropping all over the place.”

“We’ve come leap and bounds, and our data shows that we have a lot of room to grow.”

After three very big years, Alana and her father’s support team restructured the business, employing a full-time manager, at the end of 2021. After a six-month handover, Alana was able to step back from her dad’s business.

“I want to focus on Dad as a daughter, as well as my own family and business,” Alana says. “I wasn’t expecting it, but I grew into the role and found a bit of a passion for farm management on the way. I’m now applying what I learned and am using MaiaGrazing to keep an eye on my own small 32-breeder herd.”

Alana sees a great opportunity for children of farming families to bring their technology skills to bear. “My generation is up with technology, so by using farm management software we can show our parents and grandparents how it works and not just talk about it,” she says.

“I can be really proud of what I achieved in the circumstances. I grew into a position that I never thought I was cut out for, and I hope that as we move forward everything is going to be more positive for myself, our family, the business and the longevity of the business.”

BY PETER RICHARDSON, CEO @ MaiaGrazing In a world where the effects of climate change are becoming increasingly apparent, I... Read More

Editor's note: Following on from our time together at the MaiaGrazing Wilmot Field Day 2022, we invited RCS to... Read More

Been or heard about our annual MaiaGrazing Wilmot Field Day? Well have we got an exciting MWFD22 program for... Read More