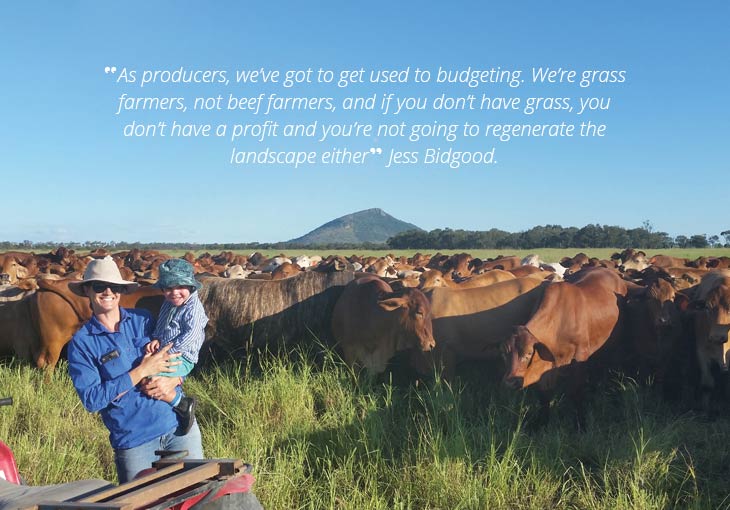 For Jess & John Bidgood, utilising MaiaGrazing’s farm management software has enabled them to undertake strategic management of pastures and stocking rates and be dynamic enough to sell or buy cattle based on sound data ahead of market moves.

The ability to continue to turn off 100% grassfed cattle to meet the organic beef market despite two years of ongoing rainfall deficiencies is an achievement Jess and John Bidgood can hang their hats on.

The Bidgoods run their organic beef enterprise, trading and finishing heifers and steers across three properties – ‘Tingle Hill’, ‘Round The Bend’ and ‘Mount Cooper’, near Baralaba, 140km south west of Rockhampton.

They buy in cattle from weaners through to 300kg, and finish them predominantly for JBS Australia’s Acres Organic Grass Fed Beef, processed at the JBS and AOM accredited processing facility in Rockhampton. If they need an alternative market, the Bidgoods sell cattle to lot feeders.

Jess and John have been using the MaiaGrazingPRO farm management software since late 2016, to inform their on-farm management decisions, literally, from the ground up.

Utilising the software has helped them to better manage stocking rate to grass supply, with far less rain than they were previously receiving.

Jess says despite experiencing two years of very dry conditions, the software has empowered them with meaningful data to plan ahead, and have the confidence to make the right decisions at the right time, without feeling under duress.

Challenging Times and the Outcome

Up to mid-2017, the rolling annual rainfall was in the range of 650-700mm, which is above long-term average of 625mm. However, as the rainfall slowly dropped, the system started to indicate that the stocking rate was effectively too high for the prevailing conditions, and this continued until by September 2017, the rolling rainfall was down to 540mm.

The Bidgoods took action, and now, despite the farm’s accrued rainfall falling even lower to 450mm, the stocking rate has been matched to carrying capacity consistently well since October 2018.

Despite the dry, comparing gross production between 2017 and 2019, data suggests greater financial returns per livestock unit (LSU) have been achieved this year, compared to 2017.

Navigating the Path with Technology

“The analytics and data generated by the software tells us how much grass the cattle have consumed. Using these real figures from the paddock analytics, we can calculate return on assets for investing in on-farm infrastructure such as water and fencing. It allows you to see where you will get the biggest bang for your buck and prioritise it.” Jess said.

Jess remarked that “the software enables us to do a whole property forecast, for six or 12 months in advance, so we can see exactly when we need to be selling down if it doesn’t rain, so we’re already making a plan”.

Conversely, when it does rain, you know how many head you can bring on and how long can you run them for, so you’re making the most of good conditions.”

“A lot of people just set stock, so they don’t make the most of when they do have an amazing season and don’t optimize their productivity when they can.”

“For us, being organic, having all the livestock treatments in one spot and being able to export a report, that just makes my life so much easier, rather than having it in five different spreadsheets. So if our auditor calls and says they’re going to audit us at a certain time, you have all that information on hand.” Jess said.

Jess says she and John enjoy doing their monthly and longer-term three-month grass budgets, so they can set out their graze plans ahead of time.

“When you’ve got a graze plan, you know what you’re doing, you know what day the cattle are going to the next paddock, and you know you’ve got enough grass to this point in time and enough to get your cattle to this particular weight,” Jess said.

Jess said the software had allowed them to take advantage of peaks in the organic market.

“When we first went into organic beef, the premium was about $2.00/kg compared to conventional,” Jess said. “It dropped to around 50-70c/kg but it’s just started to widen again and is around $1/kg at the moment compared to the average.”

“Now, we look a lot more into the big picture. We don’t just look at what we’ve got now, we are always planning ahead and doing our grazing forecasting, and that’s really what we have taken to the next level.” Jess Said.

Book your consultation to learn how MaiaGrazingPRO can help you make better decisions. Receive an in-depth product walk through tailored to your operation